OTHERS Change of Equity Interests in Kobay Systems Sdn. Bhd.

The Board of Directors of Kobay Technology Bhd. (“Kobay”) wishes to announce that its equity participation in Kobay Systems Sdn. Bhd. (“KSys” or “the Company”) has been diluted from 100% to 70% arising from the latest shares allotment (hereinafter referred to as “change of equity interest”) on 26 December 2013.

KSys was incorporated on 2 January 1998 as Unitedprise Sdn. Bhd.. It has changed its name to Kobay SCM Sdn. Bhd. on 19 December 2006 then subsequently on 7 March 2012 changed its name to Kobay Systems Sdn. Bhd.. Its current authorized capital is RM100,000 divided into 100,000 ordinary shares of RM1 each with its paid up capital of RM2 comprising of 2 ordinary shares of RM1 each. The Company is currently a dormant company. Based on the audited financial statements for the financial year ended 30 June 2013, the Company has recorded a loss of RM26,406 and the shareholders’ fund of the Company was – RM612,051.

As a result of the allotment, Kobay’s equity interest was diluted from 100% to 70%.

The subscription of 6,998 ordinary shares of RM1 each for a total cash consideration of RM6,998 will be funded from Kobay’s internally generated fund.

The change in equity interest is not expected to have material financial impact on the earning, gearing, share capital and net tangible assets of Kobay for the current financial year ending 30 June 2014.

None of the directors and major shareholders of Kobay group and/or any persons connected to them (as defined in Section 122A of the Companies Act, 1965) have any direct or indirect interests in the change of equity interest.

The Board, after due consideration of all aspects of the change of equity interest, is of the opinion that it is reasonable and is in the best interest of Kobay.

This announcement is dated 27 December 2013.

OTHERS ACQUISITION OF NEW SUBSIDIARY

Subsequent to the subscription, Wirama will become a 70% owned subsidiary company of Kobay. The other 30% equity interest is held by a Malaysian individual, Mr. Lam Wan Loong. Currently, Wirama is dormant and its intended principal activity will be supply of engineering parts and accessories, and services to oil & gas industry.

The subscription is not expected to have material financial impact on Kobay’s earning per share, net assets per share, gearing, share capital or its substantial shareholders’ shareholding for the financial year ending 30 June 2014.

None of the directors and/or major shareholders of Kobay or any person connected with them have any interest, direct or indirect, in the acquisition.

This announcement is dated 26 December 2013.

Kindly be advised of the following : 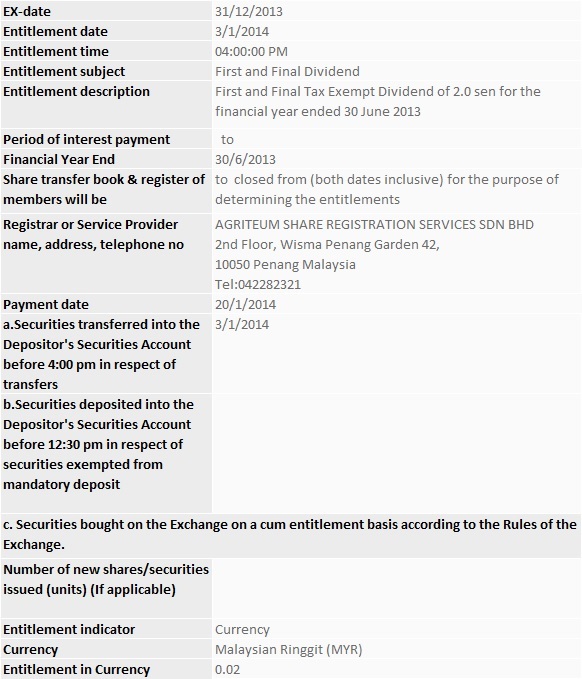 OTHERS Others – Notification of Change in Directorship

Type: Announcement
Subject: OTHERS
Description: Others – Notification of Change in Directorship

The Board of Directors of Kobay Technology Bhd. (“Kobay or “the Company”) wishes to announce that its Independent Non-executive Director, Mr. Khaw Eng Peng, who has resigned as Executive Director in Messrs. Oriental Interest Berhad (Company No.: 272144-M) with effect from 13 December 2013 of which his notification was received on 16 December 2013.

This announcement is dated 18 December 2013.

OTHERS Proposed Disposal of Property by wholly owned subsidiary

The Board of Directors of Kobay Technology Bhd. (“Kobay” or “the Company”) wishes to announce that its wholly owned subsidiary company, Bend Weld Engineering Sdn. Bhd. (“BWE” or “the Vendor”), had on 6 December 2013, entered into a Sale and Purchase Agreement (“SPA”) with Messrs. Amazing Vestrax Sdn. Bhd. (688963-U) (“the Purchaser”), to dispose of its all that piece of leasehold industrial land and a single storey factory building erected thereon bearing assessment address Plot 38, Hilir Sungai Kluang 2, Phase IV, Bayan Lepas Non-FTZ, 11900 Pulau Pinang (“the Property”) for total cash consideration of RM7.7 million (hereinafter referred to as “the Proposed Disposal”).

Subject:
Circular to Shareholders in relation to

Part A-Statement to Shareholders in relation to the Proposed Renewal of Share Buy-back Authority; and